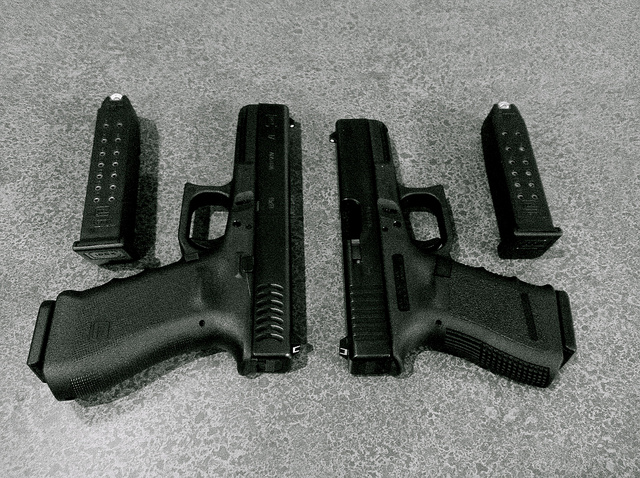 Glock 17 vs. Glock 19 for Everyday Carry: The Great Debate
Due to the popularity of the two pistols, many people argue the Glock 17 vs Glock 19 for concealed carry or just as a gun safe addition. Both pistols have considerable advantages, and they are two of the most popular handguns on the market today. You can't go wrong with either...but in some cases, one is somewhat superior to the other.
Either pistol is a good buy, and holsters for both pistols are widely available.
Intangibles matter far more than most people know, yet on-paper characteristics are also important, such as reconciling Glock 17 vs Glock 19 stats while picking between the two.

Because the barrel length is so close that it makes little difference, the Glock 17 is longer and taller. The overall length of the pistol is slightly over 8 inches, with a barrel length of 4.5 inches. The 19, on the other hand, has a 4-inch barrel and a 7.36-inch overall length. The 17 is 5.43 inches tall and holds 17+1 rounds of 9mm, whereas the 19 is 5 inches tall and holds 15+1 rounds of the same caliber. Width is the same; both pistols are 1.18 inches wide, making them fairly slim considering the capacity.
The 17 is slightly heavier than the 19 at 25 ounces unloaded, but only by a few ounces, as the 19 weighs 23.65 ounces in the same condition.Given the carrying capacity and the fact that other pistols of similar dimensions were substantially heavier, that was a fairly amazing figure when the 19 was first released...though the "gap," as it were, has narrowed significantly in recent years. In that aspect, the 19 is now about average for a tiny pistol, while the 17 is still remarkably light.

As a result, the 17 has become one of the most popular full-size weapons for everyday carry, including hidden carry, despite the 19's status as a concealed carry institution. Many people regard the 19 as a "Goldilocks" weapon, capable of serving in practically any situation.
When it comes to firing, there isn't much of a difference in recoil between the Glock 17 and the Glock 19, as the 19 isn't significantly smaller than the 17...though this is largely subjective.

There are two types of recoil, you see. There is actual recoil, which is the force generated by a gunshot, much of which is actually absorbed by the body without notice. There is also FELT recoil, which is the recoil force perceived by the shooter. The latter is entirely subjective; some people will think recoil to be moderate and manageable, others will find it light and others will find it harsh, despite all shooting the same bullet from the same gun

Some people confuse recoil with muzzle rise, which occurs when the muzzle rises after a shot is fired.
Other factors that influence felt recoil include barrel length, gun mass and distribution (in other words, where the gun is heaviest), and so on. There isn't much of a difference between Glock 17 and Glock 19 recoil. Although the 19's 4-inch barrel is certainly than adequate to help moderate any recoil, it is less than 1.5 ounces lighter and the barrel is only about.5 inches shorter.

The 19 might have a little more recoil, but it won't be much - but it might get a little snappier if you use +P ammunition.

Both pistols are known for being relatively simple to fire for practically anyone, which has long been a selling point.

Although accuracy is typically a function of the shooter more of the handgun, few will perceive a significant difference in Glock 17 vs 19 accuracy. Both handguns are recognized for being extremely accurate, to the point where the 17 and the 19 are nearly identical.
The issue about handgun barrel length is that there comes a point where it's no longer beneficial, and that threshold appears to be around 4 inches. Going from a 3.5-inch to a 4-inch barrel does not increase accuracy or velocity nearly as much as going from a 4-inch to a 4-inch barrel.

That's one of the reasons why so many people think the Glock 19 is almost the ideal handgun: it's small enough to conceal while still shooting like a full-size gun. Granted, the 17 is a full-size weapon, but it doesn't take long for the ordinary person to master it.

Compare the Glock 17 vs Glock 19 side by side for yourself. This will give you an idea of what each gun is all about by the numbers.

Glock does not disclose its MSRP. You can check Glock Blue Label prices online, but it doesn't necessarily match what you'll spend in a store. Getting into the Blue Label scheme is virtually meaningless because in-store costs fluctuate so much. In most stores, you should expect to pay between $500 and $550, however your mileage may vary.

Settling It For Yourself: Glock 17 vs Glock 19

Consider the following factors if you're debating between the Glock 17 and Glock 19, especially because they're both very common and the 17 isn't that much bigger than the 19. First and foremost, what are you planning to do with it? Second, determine which characteristics are advantageous to you in the gun's intended use.

The Glock 17 isn't the heaviest of military pistols, but it is very hefty. While many people carry a Glock 17 concealed, it isn't easy, and much care must be taken to keep it hidden. A 17 can stick out like a sore thumb for the smaller concealed carrier, as can the Glock 19 in some circumstances, as the Glock 19 is what many believe to be at the top of the line.

The Glock 17 is an excellent home defense handgun since it is simple to operate and may be fitted with lasers, lights, or a laser-light optic. The 19 have the ability to do so as well. Another consideration is that the 19 has smaller grips, which may be preferable for shooters with smaller hands.

So, do you want a bedside gun or a car gun? A high-capacity concealed carry pistol...or a weapons that can do it all? The 19 is a good all-arounder, while the 17 is a little more difficult to hide.

So, how about you? Are you a bit of a knucklehead? The 17 isn't going to be easy to hide, and if you have small hands, you might have trouble managing it.

Additional models of both pistols have become available throughout time, thus there are some Glock 17 vs 19 variants to consider.

For starters, there are now three versions of Glock handguns to choose from, each with minor enhancements. The only differences between the Generation 3 and Generation 4 handguns are Glock's Modular Backstrap System (swappable backstrap panels) and a captive recoil spring. The Glock Marksman Barrel, improved internals, forward cocking serrations, and no more finger grooves are all included in Gen 5 handguns.

Starting with Glock Gen 4 pistols, the basic Glock 17 or 19 pistol is joined by a MOS variant. MOS versions have a machined slide for use with a reflex optic, as well as four adapter plates for use with common optics.

The essential differences between Glock 17 and Glock 19 pistols don't alter much with each iteration; it's still the same game.
If you want to add an optic to a pistol, the Glock 19 MOS models are obviously going to be a bit better suited for concealed carry - and many people are doing so - but the Glock 17 MOS with an optic is really more of a home defensible pistol.

Especially if you add a light attachment to it. The larger the gun becomes as more accessories are added, and adding an optic and a light significantly increases the pistol's footprint.
If you're carrying the standard pistol, the difference between a Glock 17 and a Glock 19 isn't significant; the larger pistol adds around a half-inch to overall length and a fraction of an inch to height. While it is large, it is not impossible to hide and carry on a daily basis, and many people do so. When you add additions to the Glock 17, though, it goes from "you could if you wanted to" to "forget concealment." It's still possible to carry a Glock 19 with an optic and a light/laser.