Bidenâ€™s Plan for Guns Will Systematically Run Companies Out of Business. 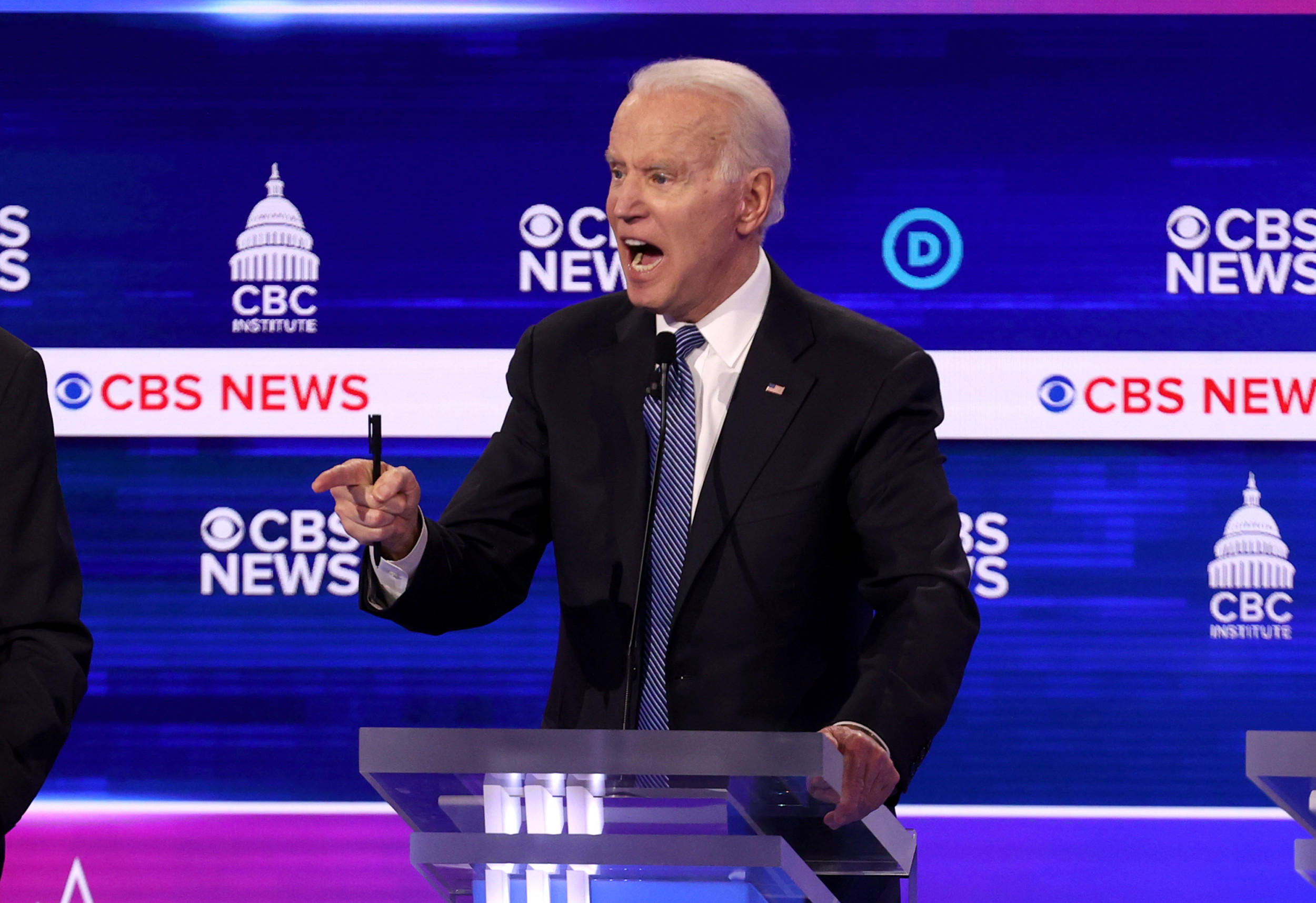 Bidenâ€™s Plan for Guns Will Systematically Run Companies Out of Business.

JOE BIDEN AND THE DEMOCRATIC PARTY HAVE ADOPTED A PLAN THAT WOULD GUT THE SECOND AMENDMENT, BANKRUPT MANUFACTURERS AND CHANGE THE FUTURE OF GUNS IN AMERICA.
The Democrat National Convention is now in the books. With Joe Biden the party’s official candidate, it’s a good time to look at some of the effects that his plan, as mirrored in the Democrat Party Platform, would have on guns and law-abiding owners.

Biden vs. Guns
A deep look at the proposals supported by Biden and the official party document show those effects would be dramatic. Lawrence G. Keane, senior vice president and general counsel for the National Shooting Sports Foundation (NSSF), said all Americans need to understand the Democrats’ plans, should they take over the White House, go much further than ever before. He said that this is the most anti-gun platform in the history of the Democratic

“Never before has the Democratic platform been so openly and explicitly hostile to the Second Amendment,” Keane told us. “… For example, Joe Biden and Kamala Harris want to ban and forcibly confiscate lawfully owned modern sporting rifles from law-abiding Americans. Another example is the platform’s call for registering American gun owners through so-called ‘universal background checks.’ Gun owners should take the time to educate themselves about what a Biden administration and Congress controlled by Speaker [Nancy] Pelosi and Senator [Chuck] Schumer mean for their Second Amendment rights.”

“The PLCAA stopped the tidal wave of frivolous lawsuits filed by big city anti-gun politicians—the very same cities experiencing rioting and spikes in violent crime—ambulance-chasing trial lawyers, and gun control groups like the Brady Center that sought to bankrupt the firearm industry through lawsuits and judgments by blaming us for the criminal misuse of lawfully sold firearms,” Keane told us.

While the surface of any lawsuit might appear one way, the underlying goal is something entirely different. The concern here is certainly the underlying; some believe the goal of any lawsuit would be to force the firearms industry to agree to settlements that might impose gun control regulations. Typically, those regulations wouldn’t have the support of the American public, nor could they pass in Congress or state legislatures.

“These lawsuits represented an existential threat to the continued existence of the firearm industry,” Keane said. “If our industry was bankrupted by massive judgments, the ability of law-abiding Americans to acquire a firearm to practice their Second Amendment rights would have become an illusion.”

“Death By a Thousand Cuts”
Andrew Cuomo, President Bill Clinton’s secretary of housing and urban development (HUD), actually admitted the strategy. He warned gun makers that if they did not negotiate with the Clinton administration they would suffer “death by a thousand cuts” from all the lawsuits. If Biden and the Democrats succeeded at repealing the PLCAA, those rights could be on the brink of disaster again.

So-Called “Assault Weapons”
Then there are the so-called “assault weapons” and Biden and the Democrats’ eagerness to ban them. These are America’s most popular rifles, used by millions of citizens for target shooting, competition, home defense and hunting. During her presidential campaign, Harris said, if elected, she would sign an executive order outlawing such firearms. She also said the government would “buy them back”—a PC term equating to confiscation.

Interestingly, Democrats got exactly what they wanted on this issue back during the Clinton administration. However, the law sunset after 10 years, with no proven positive effect.

“The Clinton-era gun ban on modern sporting rifles banned several hundred guns by name and then any semi-automatic rifle that accepted a detachable magazine (which was capped at an arbitrary 10 rounds) and two offending cosmetic features—called the ‘two feature’ test—that had no impact on how the semi-automatic rifle functioned,” Keane said. “Studies by the federal government established that the ban on modern sporting rifles and standard-size magazines had absolutely no impact on reducing violent crime. This was primarily because rifles of any kind are so rarely used in crime. Since the law sunset in 2004, modern sporting rifles and standard-size magazines have grown enormously in popularity, along with gun ownership in general, while crime has continued to fall to record lows.”

Registration Via Background Checks
Biden and the Democrats also support “universal” background checks for gun purchases. However, it is important to note that such checks are only universal for law-abiding Americans; remember, criminals don’t follow gun laws anyway.

“So-called ‘universal background checks’ or UBCs are a precursor to gun registration,” Keane told us. “The Obama-era Department of Justice acknowledged that UBC is unworkable and unenforceable without universal gun registration. But we all know that criminals will not register their guns and will not undergo background checks. Criminals, by definition, don’t obey the law.

“UBC is not about reducing crime, it is about registering gun owners,” he added. “Registration is a necessary precursor to confiscation. And we know that Biden and Harris want to confiscate guns. It is not an abstract, theoretical concern. It is what is at stake in this election.”

Internet Sales
Lastly, Biden, Harris and the Democratic Party as a whole have set their sights directly on Internet sales of guns and ammo; they like to call the “Internet loophole.”

“There is no such thing as the ‘Internet loophole,’” Keane points out. “All firearms sold to a consumer by a federally licensed dealer must be done in a face-to-face transaction and the dealer must perform a criminal background check on the buyer.

“Requiring background checks for the purchase of ammunition is simply unworkable and would crash the federal background check system. We have already seen the futile attempt to impose this requirement in California and a federal court held the law to be unconstitutional.”

Bloomberg’s Everytown for Gun Safety
There is still one more important piece to the Democratic puzzle: Everytown for Gun Safety. Funded heavily by former NYC Mayor and short-lived presidential candidate Michael Bloomberg, Everytown’s stance on gun control is well-documented. A recent report from The Hill says that Everytown plans to spend $60 million in support of Biden. Unconfirmed, however, is the rumor that Everytown will only provide that $60 million if Biden makes gun control a pillar of his campaign. But the pressure from the anti-gun group is undeniable.

“Under pressure from former NYC Mayor Michael Bloomberg and his Everytown for Gun Safety, Democrats at the national level, for the first time since gun control cost Al Gore and John Kerry the White House, now incorrectly believe that the public agrees with their radical gun control agenda,” Keane said. “Under a Biden administration and a Congress controlled by Schumer and Pelosi, that is exactly what they will do: Ban and confiscate guns, impose gun registration, have the Consumer Product Safety Commission regulate firearms, ban traditional ammunition, not just for hunting but for target shooting as well. They will tilt the balance of the Supreme Court and seek to reverse the Heller decision and strip us of our right to self-defense.”

The election is less than three months away. American gun owners should do everything they can to get the word out about Biden and his plan against guns. Spread the word on the Democrats’ plan to gut the Second Amendment and make gun ownership a second-class right. A good place to start is by sharing this information with friends and family. Then get out and vote in November. Freedom’s future is at stake.